SAVE OUR TV LICENCE

we protested that:
1. The BBC’s decision to means-test the TV licence for older people
2. The Government’s decision to make the BBC pay for the concession
Bring your Local banners and placards along with whistles, drums and other instruments.

The NPC is clear – if we fail to protect this concession, the government will begin looking at the winter fuel allowance and the bus pass. Local newspaper, the Ham & High covered our June 21st protest.

Tickets: Free Please register through Eventbrite: http://bit.ly/ucevent (Anyone not on line should ask HPAG committee for help.)

Event 2)   Paper copies of the Long Term Plan launched by NHS England  can be obtained. HPAG already has 2 copies. It appears to promise improvements. BUT the NHS PLAN is not good news. It would mean more cuts, rationing and privatisation.

Leafletting by HPAG on Monday February 4th will publicise Dignity Action Day, our group and the broken state of Social Care. Venue to be announced. Helpers welcome. A leaflet that has been designed as a result of the conference ‘Reclaim Social Care’ organised by Health Campaigns Together (HCT) can be downloaded here.

The number of unnecessary deaths is announced on November 30th. The number is expected to be very high this year. In 2016 the number was nearly 25,000 deaths. Last year (2017) it was over 34,000 deaths. To mark the announcement London Region National Pensioners Convention (NPC) has organised a protest. This will be at 12 noon on Friday 30th November. Assemble at 11.30am by the George V’s statue at Old Palace Yard, Westminster opposite the House of Lords. Black balloons will be released, one per 1000 deaths.

Should those over 75 continue to have a free TV Licence?

The BBC is conducting a consultation offering 4 options none of which is to retain the concession. The National Pensioners Convention say that such concessions are the responsibility of the government. What do you think?

Respond at www.bbc.co.uk/yoursay  or ring 0800 232 1382 to request paper copies of this document and questionnaire with a freepost envelope to take part.

AgeUK has an online petition to voice your objection. Sign  https://campaigns.ageuk.org.uk/page/34266/petition/2

But we do not want our crown post offices to become private businesses.

Please take part in the consultation, either on line or by writing. 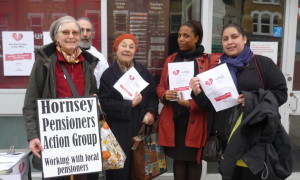 The deadline for the public consultation for Crouch End is September 6th, and for Muswell Hill September 13th. You can give your feedback on these proposals by completing the Post Office online survey via the following link postofficeviews.co.uk and entering: Muswell Hill N10 4DQ or another post office you are concerned about.

You can also email them on [email protected]

Royal Mail is privatised, but Post Office Ltd remains in public hands. Hornsey Pensioners has in the past year written to both the director of Post Office Ltd. owned by the government, and the minister responsible, but the replies indicated that Post Office Ltd must be financially viable, hence the search for firms to take over franchise.

Hornsey pensioners took part in the official consultation event for Muswell Hill Crown Post Office on Wednesday 16th August.  The business man applying for the franchise, Elliott Jacobs was present. He was told that counter staff at Muswell Hill were unhappy about transferring to his shop. I asked him whether he would recognise and negotiate their union CWU and he declined.

On Saturday August 26th I visited the shop at East Finchley that took over the franchise of the Crown Post Office. Our group had opposed the franchise, the  photo is dated April 2013, and the franchise took place in 2014.  The shop is well laid out, but the merchandise of office and art materials fronts the entrance with post office services towards the rear.

In Muswell Hill we already have shops – Rymans for office equipment, and ‘Art for Arts’ Sake’ for artists’ materials.  Do we need more such outlets?  While there I approached one of the counter staff at East Finchley and asked whether she was a member of CWU – apparently not.

The Communications and Workers Union (CWU) conducted a picket that morning to object to further privatisations of post offices in this area. The CWU over many years has negotiated pay, conditions and career path for post office counter staff.

For us as customers, the union plays a role in maintaining standards, making sure that post offices services are conducted in a professional manner. They make sure that the staff we depend upon for advice are well trained.

Warning about current changes in the NHS

at the Southgate Beaumont Care Home,

The meeting is a 10 minute walk from Southgate station, and on bus routes 121, W6 and 299.  It is called by Enfield Over 50’s Forum about a consultation being conducted by the Enfield Clinical Commissioning Group (CCG).

The meeting is on ‘Adherence to Evidence-Based Medicine’ (AEBM)

The Enfield CCG proposals are to introduce another layer of control, that would overrule doctors’ clinical judgement on a number of  treatments, and if applied would affect patients very badly.  The front page of the August/September newsletter of Enfield Over 50’s Forums can be downloaded.  Download

If AEBM was applied in Enfield, other borough CCGs could follow.

Note that all CCGs in North Central London boroughs: Barnet, Camden, Enfield, Haringey & Islington are under pressure to eliminate their ‘deficits’ that are really ‘overspends’ caused by under-funding)