Arrive any time after 1.30pm for prompt start at 2pm

Access for the Marian Centre is through the big metal gates shown on the photograph, behind the bus stop on Park Road for W7 buses towards Muswell Hill. 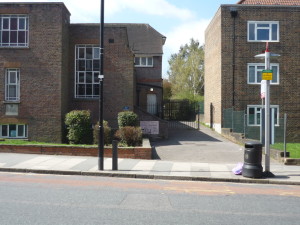 The entrance is by the steps on the right of the building, but a step free access can be found through the second wooden gates around the building.

Look out for our notices to guide you.

Cross safely using the zebra crossing or the crossing with traffic lights.

Nominations and volunteers are welcome.

Cooption of helpers and committee members.

Nominations and volunteers are welcome.

Motions: these were listed in the December notice. In addition the committee proposes constitutional changes: subscriptions remain at £5 but must be paid by June, additional officers will be proposed to reflect the work of the committee.

All motions including those on Reverse marketisation of NHS and Nurse Staffing levels will be circulated at the AGM.