Jan. 20th interactive workshop ’Dispel the Blues’, Feb. 17th AGM and meals for the housebound. March 16th ‘What can the London Mayor do for us?’

Lianna explained that the charity Transport for All (TfA) has been championing the cause of accessible transport in the capital London for over two decades.

It has a website www.transportforall.org.uk and a helpline 020 7 737 23339 from which you can get advice on making a journey or help to make a complaint.

Lianna works with groups organising demonstrations to highlight where disabled and the less mobile are treated unfairly on transport. At one demo those in wheel-chairs got traffic to a standstill.

Oakwood Station had lifts that could not be used because of staff shortages. The wheel-chair users came out in force telling others that they would be entitled to claim the taxi fare needed to get to a station that did have lift access. 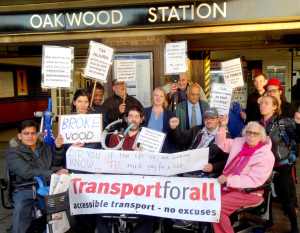 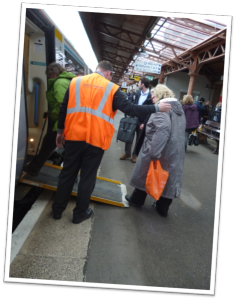 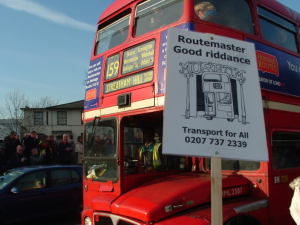 Many campaigns have won concessions, such as the step-free access at all Cross-Rail stations. But the disabled still suffer discrimination. Assistance is on a turn up and ask basis at underground stations, but on railways this has to be booked ahead.

Many problems were raised as to access to buses, due to overcrowding, space restrictions for wheelchairs and buggies. Traffic congestion adds to the problems causing many wheel-chair users to give up and stay at home.

Lianna had also told us about a joint protest on Thursday 26th November.

[We notice that on that day taxi-cab drivers were protesting. It evident that the public are not being properly protected against illegal touts.]

Lianna was thanked. Her talk was really appreciated.

Lianna can keep you informed of the activities of Transport for All. Ask to be on her email list 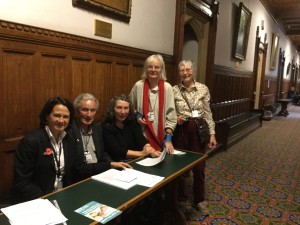 Attending were Ann Anderson, Barbara Ryan, Janet Shapiro & Gordon Peters. (Clive Evers & Audrey Evers stayed in Committee Room 14 in order to report back on speeches)
There was an important debate that day on ‘Draft Investigatory Powers’ but Catherine came as soon as she could and met with four of us outside Committee Room 14. Catherine was given a pack of information concerning the activities of HPAG.

The following issues were raised:

We thanked Catherine for granting us time, listening and sharing information.

We were all able to join the rally after our time with Catherine.

HPAG had already made a formal response to the consultation on Adult Social Care Services. In addition HPAG sent a letter to the cabinet of the Haringey Council before November 10th asking that the proposed cuts were delayed.

A number of members of Hornsey Pensioners came – but not many were in time for the photo reproduced from the Ham & High Broadway. 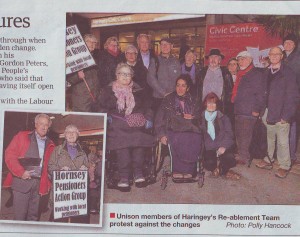 See Gordon Peters and Janet Shapiro in the insert. Gordon is chair of the Older People’s Reference Group; he made a verbal presentation to the councillors at the Civic Centre. (summary on next page)

This was also signed by HPAG members Pamela Moffatt & Lourdes Keever.
Patrick Morreau of Haringey Forum for Older People was a signatory. Patrick was one of those responsible for our Dementia Clinic at Hornsey Central.

Cllr Peter Morton has replied to the HPAG appeal to cabinet.

He pointed out that the reserves would be needed to cover future cuts in funding.

Mayor of London—Election May 2016 What do you want in our Mayoral Manifesto? Ideas wanted.

Peoples’s Post campaign sets out to defend the universal postal service and employment standards, under threat from privatisation. http://www.cwu.org/peoplespost.html What should we do?

Keep me posted Campaign defends our choice on how we are contacted by banks and utility companies, with paper copies if wanted. http://www.keepmeposteduk.com/campaign

WOOD GREEN SENIORS CLUB opposite Wood Green Station.
FILMS JUST FOR SENIORS EVERY MONDAY AT NOON
(PLUS GET A FREE CUP OF TEA AND A BISCUIT WITH EACH £3.29 TICKET!)
Upcoming Film: 30/11/2015 Hot Pursuit

Social Lunches are held monthly at Jacksons Lane on last Thursday of each month from 11.45am-2.30pm. The last on was on Oct. 29th.
Book in advance. Wheelchair spaces must be booked in advance and discussed with Stuart over the phone. Due to space we can only accommodate 3 wheelchair spaces.
Email [email protected] or call 020 8347 2411 Stuart Cox Participation Manager 269a Archway Road, London, N6 5AA

Get Involved
Hornsey Pensioners Action Group welcomes offers of help. There are always many tasks; more hands are needed.
Consider helping with our monthly envelope stuffing, setting up or clearing away at meetings.
Think about joining the committee!