Report of talk on October 21st.
‘How can we stop the NHS being dismantled?’ 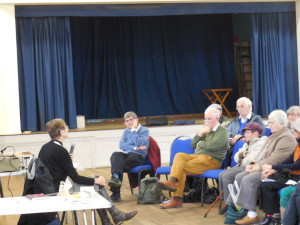 The meeting was well attended indicating the high level of concern amongst local pensioners that we should conserve and protect our NHS.

A brief report of the meeting has been submitted to the Ham& High Broadway and is expected to be in print on Thursday October 29th.
Gay reminded us that that both Scotland and Wales had retained the old style NHS; but in England the Health & Social Care Act (2012) had made changes to how the NHS was run.

She asked us what we thought were the problems currently facing the NHS. We came up with many – the shortage of staff, increased burdens of bureaucratic paper work on staff, delays on discharge from hospital caused by local authority’s shortage of facilities and funding.

Others indicated changes in organisational practice as systemic causes for the problems, one being the costs and increasing tariffs for medical procedures – that alone absorbs a large proportion of overall funding. Another was the Private Finance Initiatives (PFIs) used to fund many hospital builds since the late 80’s and beyond as an alternative to public borrowing, even though that would have been a cheaper option. It is now acknowledged that PFI contracts were a bad deal and many hospitals are suffering crippling debts, causing a massive shortage of beds all across London.

The introduction of the ‘purchaser/provider split’, introduced in 1990, was mentioned. This separates the responsibilities for commissioning—that is finding out what was needed and then buying it — and the provision of services. It introduced contracting. that many consider has since led to fragmentation and creeping privatisation of services.

Gay stressed how important it was to challenge the ‘myths’ put out by the government about the causes of stress on the NHS: that while the UK is in deficit healthcare is unaffordable and that we are all living longer and putting heavy demands on health services. She suggested ways in which funding could be released for NHS costs, such as a review of the tax system whereby the ultra rich could make a fair contribution. There is media confusion; it is not made clear that real NHS funding is below what is needed to maintain standards, and that the NHS is very cost effective and performs well. In contrast the insurance system adopted in USA fails most people even with a high expenditure.

The pay of NHS health workers has been frozen. The quality of care depends upon its skilled staff, yet the real value of pay in the NHS has been falling for five years . (Apparently 60% of NHS staff will not get any pay rise at all this year.) This leads to staff leaving, a heavier work load on those that remain, and a higher dependency on agency nurses. Agency staff cost more but cannot perform as well as permanent staff.

Another problem in London is that para-medics, once trained, cannot afford to live in London, leading to a critical shortage. Under these circumstances we can understand why loyal health workers threaten strike action. In addition to underfunding and backdoor privatisation of healthcare services, there have been draconian cuts in the funding of local authorities that have responsibility for social care. There has been a 30% cut in social care services with long-term care largely privatised.

Gay mentioned a new threat. Junior doctors used to receive unsocial hours payment. They and nurses depend upon this extra earnings to survive. Yet the government proposes to abolish a large part of these payments. If the government succeeds with the doctors, nurses will be next. Yet the government wants to force through this reduction in pay as part of plans for 7 day working, ignoring the shortage of doctors. For nurses there is an inadequate number of training places.

Gay’s message was that people should be aware of the government’s agenda.
Everything the government is doing is so crazy the only credible explanation is illustrated by the quotation of Noam Chomsky that was put up on the screen: 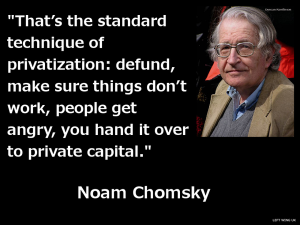 But what can we do?

Public pressure does have effects; Lewisham Hospital was saved after a determined campaign, and now it is announced that there is a reprieve for at least 5 years for all the A and E Departments in SE London hospitals, including Lewisham.

Gay said we should make contact with residents, possibly on high-street stalls, to make sure that changes to the NHS are discussed. She also suggested that we get our younger friends and relatives to engage with social media in defence of the NHS.

Two issues were raised. One was the proposed joint commissioning of out of hours GP services and the 111 call service over five London Boroughs. There has been a local campaign against such a contract; the increase in scale means that a GP collaborative could not win the contract against the financial strength of a private global company. This would make effective monitoring of quality very unlikely and services are likely to suffer. It was suggested that a template letter be composed to help people approach the local CCG.

The other is to support the NHS Reinstatement Bill that reaches its second reading in March next year. This bill restores to the Secretary of State responsibility for provision of health services that was lost by the Health and Social Care Act.

One of our members who could not attend, had sent a glowing report of the treatment received when referred by her doctor to the new Ambulatory Care Centre (Adults) at Whittington Health. Her care was prompt, attentive and efficient and she was also given a complimentary lunch box. These are the sort of stories that we want to hear for decades to come.

There were lots of materials out on display for both KONP and NPC. Gay was thanked for coming and chat continued over refreshments. The raffle followed.

Let us know if you wish to join a group that will meet your MP.

The NPC has called a national Lobby of Parliament for Wednesday 4 November 2015, with a rally in Committee Room 14, House of Commons from 1-3pm.

Assemble for a photograph 11.30 am at Old Palace Yard (opposite the House of Lords)

There will be a range of speakers and government ministers will be invited to speak. The speakers at the rally will be Nick Thomas Symonds (shadow pension minister), Neel Radia (National Association of Care Catering), Rebecca Winson (GMB young member), Kelvin Hopkins, and PCS general secretary Mark Serwotka.

Catherine West MP has agreed to meet us near Committee Room 14. (we can meet her and easily join the main rally)

Mayor of London—Election May 2016 What do you want in our Mayoral Manifesto? Ideas wanted.

Peoples’s Post campaign sets out to defend the universal postal service and employment standards, under threat from privatisation. http://www.cwu.org/peoplespost.html What should we do?

Keep me posted Campaign defends our choice on how we are contacted by banks and utility companies, with paper copies if wanted. http://www.keepmeposteduk.com/campaign

Staff and volunteers handed out information on how you can save money on energy bills.

The local charity is part of Big Energy Saving Week – a joint campaign with Energy Saving Trust, the Department of Energy and Climate Change and Citizens Advice.

Hopefully you may still be able to get advice over the telephone through the Energy Saving Advice Service on 0300 123 1234. For more information please contact: Lynn Hannah CEO [email protected] or Mobile: 07885881799

Social Lunches are held monthly at Jacksons Lane on last Thursday of each month from 11.45am-2.30pm. The last on was on Oct. 29th.