This will be a meeting on Saturday February 1st at Hornsey Library that will begin in the foyer of Hornsey Library, opened by the Mayor of Haringey, and then proceed to the Gallery for speeches.

The meeting will celebrate the support of Haringey organisations that have signed the National Pensioners Conventions Dignity Code.  This can be found on www.npcuk.org

PS HPAG members will also be helping with a stand to publicise such events at Whittington Hospital on 27th, 28th, 29th and 30th Jan.  There will also be an event on 31st at Islington Town Hall.

Come and Join Us

Audrey was Mistress of Ceremonies 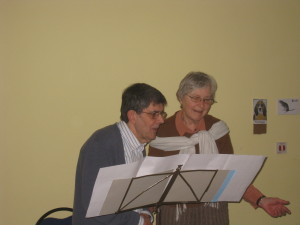 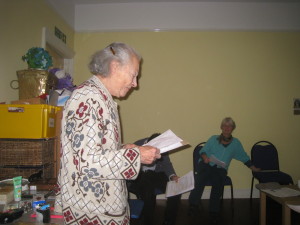 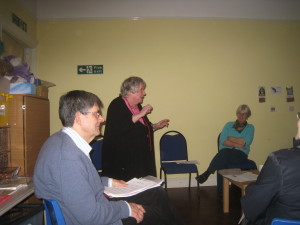 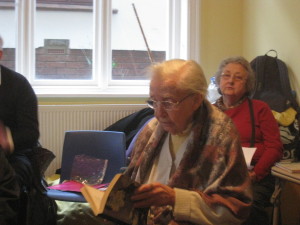 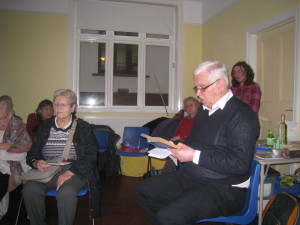 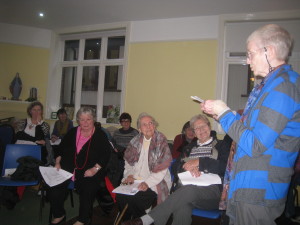 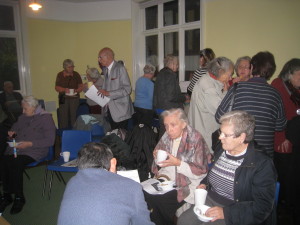 Would you like to stand for the Executive of Greater London Region National Pensioners Convention? ( GLRNPC) It meets monthly at Walkden House, 10 Melton Street NW1 2EJ near Euston station. Nominations are needed before February 13th. Janet can tell you more.

Become an Associate Member of GLR NPC, (£5 per year) and get monthly updates. The next London Regional Council meeting will take place on:- Thursday 30th January, at St Pancras Church Hall 11.00 to 3.30pm. All delegates and associate members are welcome to attend.

Please let us know if you or your friends are concerned that the Housebound Library Service should not be lost. We want to make a convincing case to Haringey Council for the retention of this service.  See the Survey on Library Services www.haringey.gov.uk/librariesreview ; Respond by Jan 22nd online or get hard copies from your local library.  Friends of local libraries meet on 16 January (12.30-2.30pm) to discuss the review of library services further.

February 1st Dignity Day: On this day the Dignity Code will be promoted by the National Pensioners Convention. HPAG’s presentation will be at Hornsey Library, to be launched by the Mayor of Haringey; other agencies that have signed the Code will attend. There will be stalls at WhittingtonHospital the week before.

On November 1st HPAG submitted aural evidence and later documented evidence.  Copies of this can be obtained form Janet.

Lobby of Parliament: Clive, Barbara and Janet attended the Rally at the House of Commons on November 27th. HPAG has sought an opportunity to meet our MP Lynne Featherstone who could not meet us on the Lobby Day. So far we have not heard when we can meet her.

Ham & High Column. So far we have had several articles published in the Ham & High.  The next one on the importance of Library services is due on January 9th. We hope that the next one may be on the difficulties faced by older people when shopping.

Loss of staff manning London Transport stations. This is currently a concern and may need action.

Other concerns.  Do let us know whether there are problems facing older people that we should campaign about.